Home » About Our Town 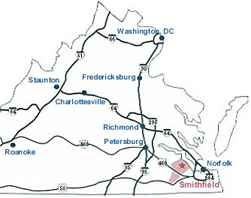 Smithfield has many of the charms associated with Hampton Roads communities, including 18th & 19th Century architecture, a revitalized historic downtown, and all the character of a former colonial seaport. According to the Virginia Landmarks Register, Smithfield is "perhaps the best preserved of Virginia's Colonial seaports."

Located in Isle of Wight County, Smithfield has a population of approximately 8,100 (2010 Census population - 8,089) and is approximately 10.1 square miles in size. Smithfield offers residents a small-town atmosphere, a good school system, affordable housing, a historic downtown, and a new state-of-the-art community/conference center - The Smithfield Center. According to the Virginia Review, Smithfield is "without a doubt, one of the prettiest towns in Virginia."

Nurtured by trade and commerce, Smithfield soon became a town of industry with four plants devoted to the art of curing the world famous "Smithfield Ham". Once a commercial center for shipping, Smithfield has evolved to host one of the area's largest meat-processing industries as well as the home to one of Hampton Roads' largest employers - Smithfield Foods, Inc. - a Fortune 500 company with its corporate headquarters in Smithfield. Smithfield was just recently named "one of the 50 best small southern towns".