Weather: Fair and 61°F
A A A
About Our TownEmploymentDownloadsContact Us
History of the Town

Home » About Our Town » History of the Town

Smithfield and surrounding Isle of Wight County are as old as Virginia itself, having been first colonized in 1634. Located on the banks of the Pagan River, and lying on the opposite shore of the James River, across from Jamestown, the area was soon discovered by Captain John Smith and other early settlers. Smithfield and surrounding counties saw action during the Revolutionary War and Civil War, mainly because of its proximity to the James River.

Smithfield was born on the banks of the Pagan River and incorporated in 1752 by Arthur Smith IV. "Nurtured by trade and commerce, Smithfield was, from its very beginning, a 'river town,' and its whole life and growth have been conditioned by the river." Arthur Smith IV parceled out his family farm into 72 lots and 4 streets to house British merchants and ship captains (see picture right - click on the picture to see a larger version). Today, as you walk the streets of the Town, you will find that Smithfield still has its historical charm. Smithfield's Historic District boasts over 70 buildings of exceptional architectural importance, including residences of the Colonial, Federal and Victorian periods. 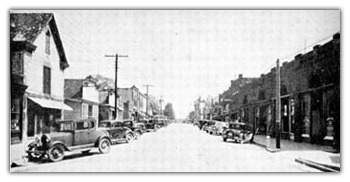 To preserve the historical charm, the Town of Smithfield and individual property owners took the steps to protect the integrity and history of their ancestors by enacting a Historic Preservation District Ordinance in 1979. This ordinance set boundaries for a local historic district and created a Board of Historic and Architectural Review (BHAR) to review proposed changes to the properties in the historic district. The Zoning Ordinance and the "Historic District Design Guidelines" provide definite standards that take some of the guesswork out of what is appropriate for the district. The "Historic District Design Guidelines" are available at Town Hall for $5.00. Smithfield is a town with a rich past and wonderful future...