Weather: Rain Fog/Mist and Breezy and 45°F
A A A
About Our TownEmploymentDownloadsContact Us
Home » Staff » Bryan Miller 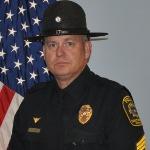 Sgt. Miller spent over 21 years serving his country as a member of the United States Air Force, retiring as an E-7/MSgt. During his Air Force career he lived in, worked in, and visited many countries and numerous states, having moved nine times in 21 years. Since his military retirement in 2004 he is glad to have established himself and his family in the Town of Smithfield. Sgt. Miller has been serving his community as a member of the Smithfield Police Department since 2005.

He has been married to his beautiful wife Sherry since 1987. They have three children, six grandsons, and four granddaughters.