Weather: Overcast and 50°F
A A A
About Our TownEmploymentDownloadsContact Us
Home » Staff » William Wooley 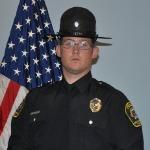 Officer Wooley was born and raised in Smithfield, and is a 2009 graduate of Smithfield High School. After high school, he attended Valley Forge Military College in Pennsylvania, where he received an Associates Degree in Business, and then transferred to James Madison University. After college, he served as a Correctional Officer at Augusta Correctional Center in Craigsville, Virginia.

Officer Wooley also served as an Infantryman in the Virginia Army National Guard for six years. He has been with the Smithfield Police Department since 2015, and is a May 2015 graduate of the Hampton Roads Criminal Justice Training Academy.

In his free time, Officer Wooley enjoys fishing, hunting, camping, and spending time with his family and friends